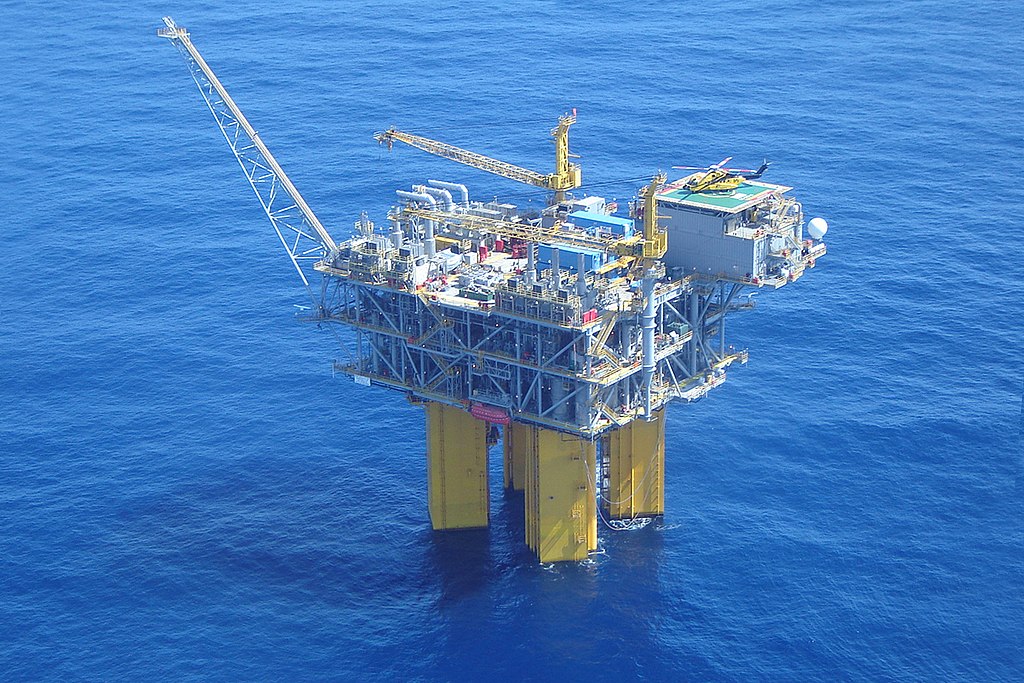 I was conversing with Anne in the machine shop. Or, more specifically, as usual, I was listening to her lecture me in a high-pitched, frantic voice about some sort of safety violation. In this case, it was a guard left too high on a band saw. It wasn’t even me who had left it like that. Anne is the junior safety officer. She took her job so seriously that everyone hated her.

Her boss, Chris, the senior safety officer, might see a guard left too high, and he’d smile at me, he’d glance at the guard, look back at me, until suddenly I understood, and sheepishly lowered the guard.

The only place Anne was tolerable was in the multi-purpose room. We have a huge room under the helipad that’s used for storage, meetings, and anything where a large space is necessary. It’s usually mostly empty except when a supply ship arrives.

One time one of the crates that arrive was marked ‘Recreational Supplies.’ Oddly, with 180 people on this platform, you’d think some of them would take interest. But it just sat there. So, I finally opened up. As the machinist, I was as qualified as anyone, right? Looking inside, I found the most ridiculous collection of equipment. There were 20 baseball mitts, but not balls or bats. There were 12 basketballs. That was good. Then there were two fishing nets. Like, here in the windy North Sea, anyone might like to drape a net off the platform into the freezing cold water 100 feet below, to recreationally catch some fish. Finally, there was something that particularly interested me: Twelve pickleball paddles and 100 pickleballs. Cool! I had played some pickleball, and rather liked the sport. But there were no nets.

I waited and waited for something to happen. I wasn’t quite sure what. The only things that were being used were the basketballs. Occasionally some guys would make use of the hoops that had been thoughtfully installed in the multi-purpose room when the rig was built.

I decided it was time to take action. I got permission to paint the stripes necessary for two pickleball courts on the floor. I managed to get the paint crew to make the stripes. As to nets, it didn’t take much to weld up some portable frames from our huge, useless stock of 1-inch by 1-inch square steel tubing, and cut up those fishing nets into pickleball nets.

All that was the easy part. I put up platform-wide announcements inviting everyone to play pickleball. In my mind, there’d be at least 20 people, and we’d have to wait our turns to play. In reality, four people signed up, so there were five of us total.

One of those people greatly distressed me: It was Anne. I can’t say I hated her, but it was the next worst thing. She’s tall and skinny, and her long, smooth, shiny hair that stops just above her butt fits over her head like a helmet. But that voice! And the fact that even on the pickleball court, she had to be the boss. She made a terrible partner. She’d spend so much energy telling me what to do that when she and I were paired up, I played badly and we generally lost.

One day we were just starting to play, and the whole platform shook. ‘Earthquake,’ I thought. Someone else thought there was an explosion, maybe in the power unit or on the drilling floor. Anne just said, “Oh no,” and went running.

It turns out a supply ship had bumped into one of the four huge pillars that support the platform. Anne called me on the walkie talkie. I was to grab a magnifluxer from the machine shop, and inspect the pillar for cracks. She was even more frantic than usual. No polite words what-so-ever, and she had a few choice swear words for me when I didn’t react instantly.

Well, I went into the pillar, where I met Anne, and she showed me the area where the ship had hit. I checked for a good hour before she was satisfied that there was no damage.

The next day, we reconvened for more pickleball, and sure enough, I was stuck with Anne again. I swear, she arranged to be my partner more than the required amount. I’d like to be a hundred miles away from her, yet she seemed to stick to me like glue. Even on the job. Like, out of 180 people, why did it have to be me inspecting the pillar with her?

On this day after the little bump by the supply ship, Anne was in top form, literally yelling at me at one point about not running a kitchen rally as long as I could have.

That was it. Suddenly, I had enough. I yelled back, “Anne, I don’t like you. I’ve never liked you in the whole six years we’ve been working together. I’ll never like you.”

I wasn’t satisfied yet, adding, “No one likes you!”

As I was saying these things, she just stood there, quietly saying “Oh,” between each of my statements. Her eyes filled with tears, and she ran out of the multi-purpose room.

I felt terrible immediately. Why had I said all that? And in front of the others. I must have hurt her feelings terribly.

Cell phones don’t work on the platform. I tried reaching her by walkie talkie, but she wasn’t answering.

That evening after my shift, I sat on my bunk, and broke down and cried. I had been terribly cruel to Anne. I crushed her. She wasn’t a bad girl. Just a little crazy.

The next morning, a helicopter came and took away one of our crew. Someone was being med-evaced. I was trying to figure out who. Finally, I found out it was Anne.

‘Oh, no,’ I thought. I had no idea what had happened, but was pretty sure my tirade was part of it.

Over the next days, no one heard anything about Anne. Our two-month rotation ended, and it would be another month before I’d be back on the platform. Anne, and whatever the heck had happened to her was never far from my mind.

Finally, I was back on the platform. I asked around, but no one knew anything about Anne until I ran into her boss, Chris. “Oh, yeah, she’s back.” is all he would say, but he added a wry smile. I wondered what that was about.

A day later she came into the machine shop. I was expecting some sort of typical histrionic performance, maybe about an air hose laying on the floor or something. She smiled at me. She actually smiled. That was very weird indeed. She had a bottle of ketchup. She sprayed a little bit on a frayed electrical cord, and smiled again. She sprayed a little more on a box of sharp lathe bits in a box teetering almost half off the edge of a table, and she laughed!

Evidently, this ketchup business was her new way of pointing out safety issues.

This was becoming very strange. I pulled her aside, and started to apologize for my tirade, something I had been hoping to do for the past two-and-a-half months. She brushed it off instantly.

Over the next weeks, she stayed calm as a cucumber. She was downright pleasant every time I ran into her. I was starting to think of her as attractive. How crazy is that? She never did tell me what had happened until about middle of the third week. She and I found ourselves enjoying a meal together, and she told me the whole story.

She had decided that the ship bumping into the pillar was her fault. She was the safety officer in charge. The rule was that supply ships had to stay 40 feet away from the pillars. She was supposed to be on deck, watching and directing, but she had abandoned her post to play pickleball. After all, the ships never hit pillars, and didn’t need any guidance, right? If the ship had bumped harder, it could have destroyed the whole platform. It would have had to be a way, way harder collision, but I didn’t interrupt her with that info.

So, she felt pretty badly when the little collision that was her job to prevent, happened. She took that very, very seriously. Then, when I yelled at her, the dam broke. She assured me it wasn’t my yelling at her that caused the psychological break. It was only the trigger. The break was on the verge of happening. She did add something cryptic at the time. She said that she had always really liked me. ‘Well, she sure had a strange way of showing it,’ I figured.

They flew her off the platform to the on-shore hospital, where she met with a psychiatrist. He gave her some tranquilizers, and then set up ongoing consultation with a psychologist. She told me the root of everything that was wrong – her breakdown, her horrible frantic attitude, was that she was taking everything too seriously. Too personally. Together with the shrink, they traced it back to when in her adolescence, her mother started getting heavily into prescription drugs, and walked around the house like a zombie. Her father was at work all day. Over and over again, she had to prevent accidents that her mother was setting up. Fires in the kitchen, the mother tripping over furniture, broken bottles, just all sorts of things. I can only imagine the impact of trying to watch over one’s own mother like that must have had on a little girl.

I understood that’s why she had become a safety officer. It had become part of who she was. Being on the oil rig was like watching over her mother all over again, but now there were 180 people to watch over. She had taken it too seriously.

I’ve heard of psychologists having good results for some situations. Well this guy, whoever it was, did a spectacular job. It was the same Anne, but entirely without the squeaky, high, frantic voice, and without the bossy attitude. And it stuck. She never went back to the way she was.

Now there were 8 or 9 people playing pickleball every day that they could get the free time. We had both courts going. I was there pretty much every minute I wasn’t on duty. So was Anne. She and I were becoming really good players. We seeked each other out as teammates.

At the end of our next rotation is when it got weird. For some reason, I drove out and visited her. I met her family. I played pickleball in the park with her friends.

Of course that was three years ago. We’re happily married, and she’s pregnant.