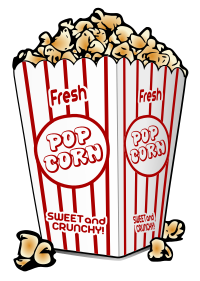 Note: After I wrote this article, I found that I had already written an article on ending popcorn wars, but I think this one is better, so I have gone ahead and added it.

You may know that a rapid-fire volley while all players are standing just behind the non-volley line is sometimes called a popcorn war. No doubt you’ve found yourself involved in popcorn wars numerous times. It usually starts with a gentle dinking rally in the kitchen. Suddenly, someone sees an opportunity and hits the ball with a rapid forehand. The opponent hits it back just as quickly. It can be bashed back and forth several times, never bouncing on the ground. You feel like there is almost no time to react, and you’re lucky just to get it back across the net. Your opponents feel the same way. It usually ends when someone loses control, or when someone gets tagged.

Hit the ball with a fairly powerful forehand, or backhand stroke using a lot of topspin.

Block the hit, so it drops gently into the kitchen, reducing the popcorn war back down to a dinking rally.

If you don’t think you can get it to go low enough, try placing it just a foot or two to the right or left of your opponent, so they are less likely to return an offensive shot.

You might try a lob here. That can be surprising coming out of a popcorn war. Note: You’ll surely hit it too long, unless you make a strong effort to get it high. Up, not out. Like all lobs, if it is too high, however, the opponents will have time to run back and get it.

The final option is tagging. It’s not a strategy for friendly recreational play, but if you can send the ball right at your opponent’s upper body, there’s not much the opponent can do about it. The opponent may get hit with the ball, but in any case, is not likely to get the paddle in a position to return your ball.