In this video, you’ll see pickleball paddle manipulation. I make it look simple because I’ve done it a thousand times. You can do it a thousand times too. It makes good use of your time between games while you’re waiting for other players to use the court. This exercise has a valid purpose. It will help with your hand-eye coordination, and with your instinctive feel for how you are holding the paddle in your hand. That’s very important for accurate shots.

For best results, do this on grass or a soft surface, because dropping your paddle on a hard surface once or twice will work out fine, but after a while, it will break down.

If you watch the video carefully, you’ll see that most of what I’m doing is based on two spins per toss.

To start, just flip the paddle from hand to hand with a single spin. It is important to use both hands right from the beginning, otherwise you’ll always have trouble with the non-dominant hand.

When you’re good at single spins, work on doubles. One of the things that may come naturally to you is to make sure the paddle spins flat. By that, I mean, it shouldn’t rotate on its axis while it is in the air, but should remain in a vertical orientation. If it rotates, or becomes horizontal, it will catch in the air and become unpredictable. Looking carefully at the video, you’ll see I actually had trouble with that during the first couple of tosses.

Everything else such as bouncing it off your feet, transverse throws, under the leg, behind the back, and the head balance are easily accomplished after you master the double spins. Quite possibly you’ll learn some things I didn’t demonstrate. Then you can teach me.

The Story Behind This Paddle 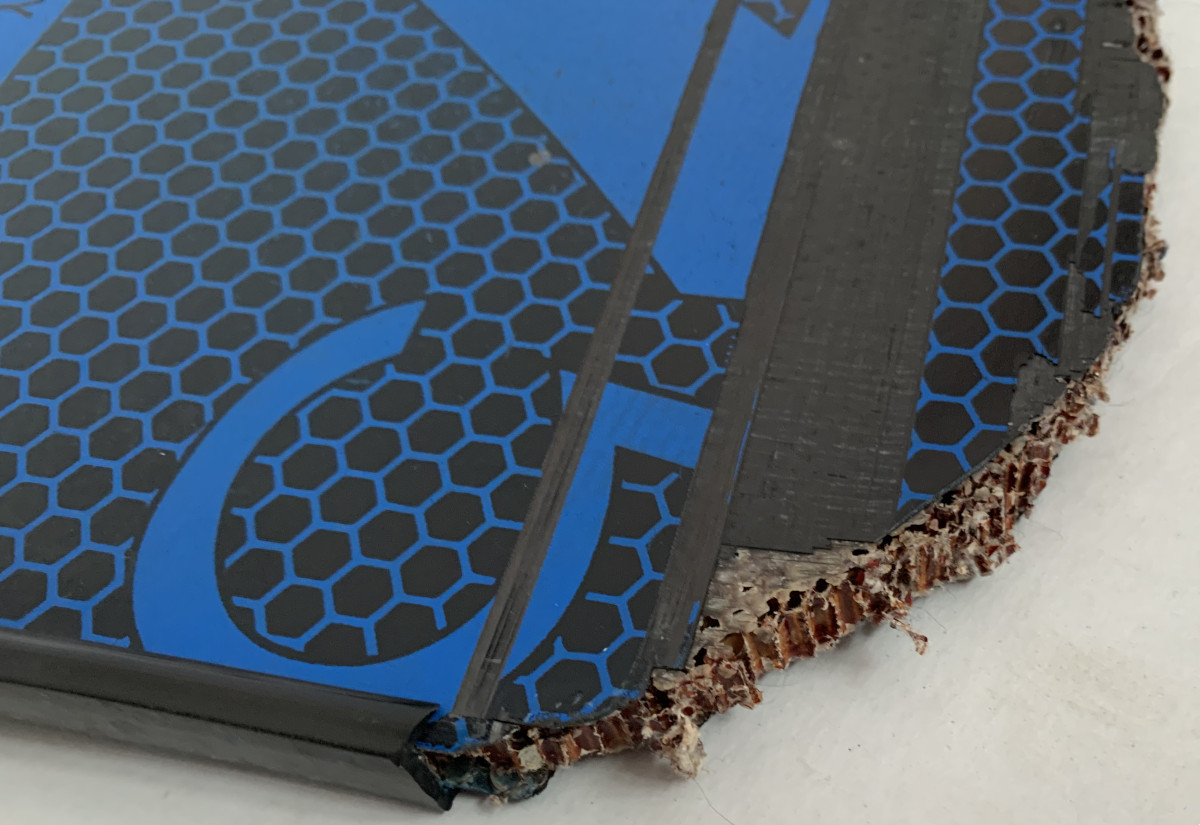 The paddle you see pictured above was my paddle with which I learned not only more pickleball, but some of the silly moves such as Strange Serve. I learned some additional tricks which I’ll be demonstrating on this website soon. As you might imagine, I dropped it a few times. Or, maybe more than a few times.

At first, it just started to show cracks at the top corners. Then it got worse, as you can see below: 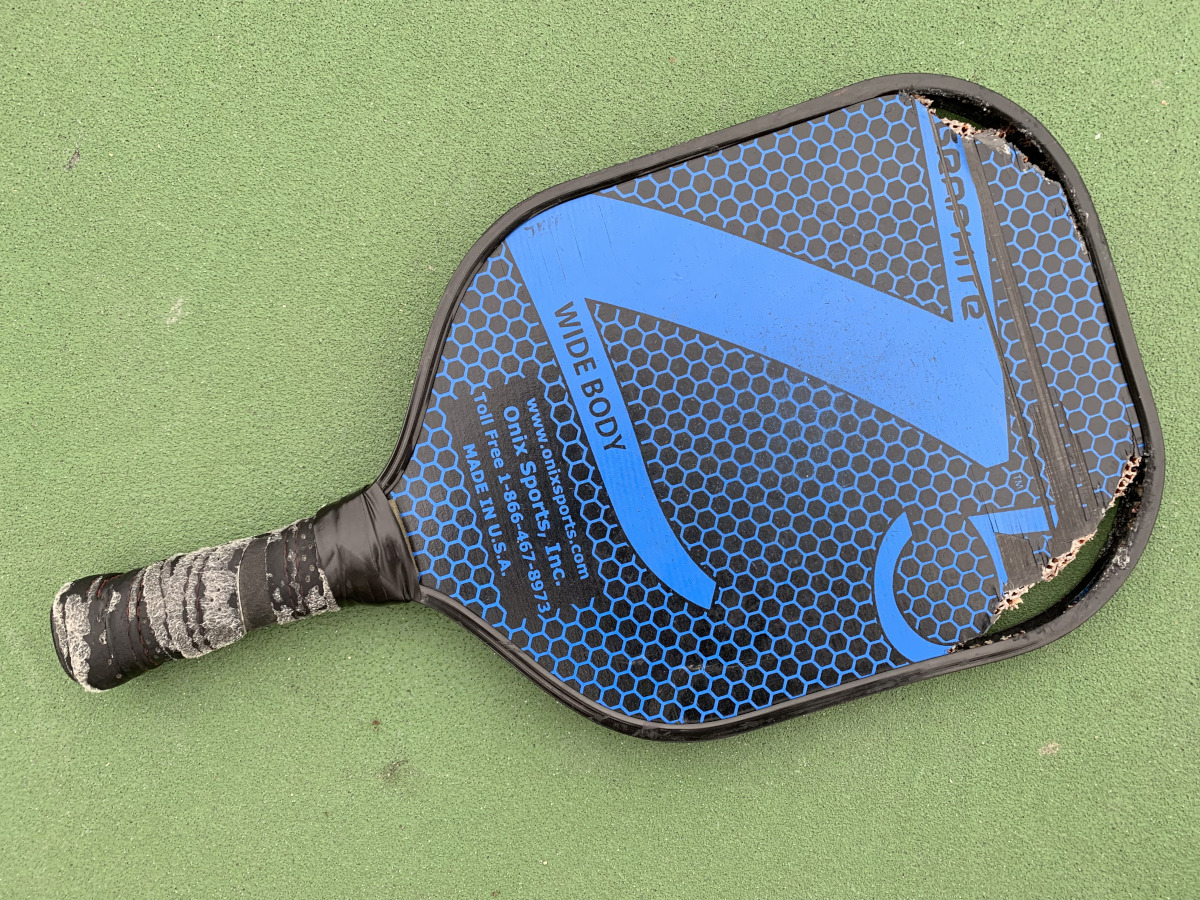 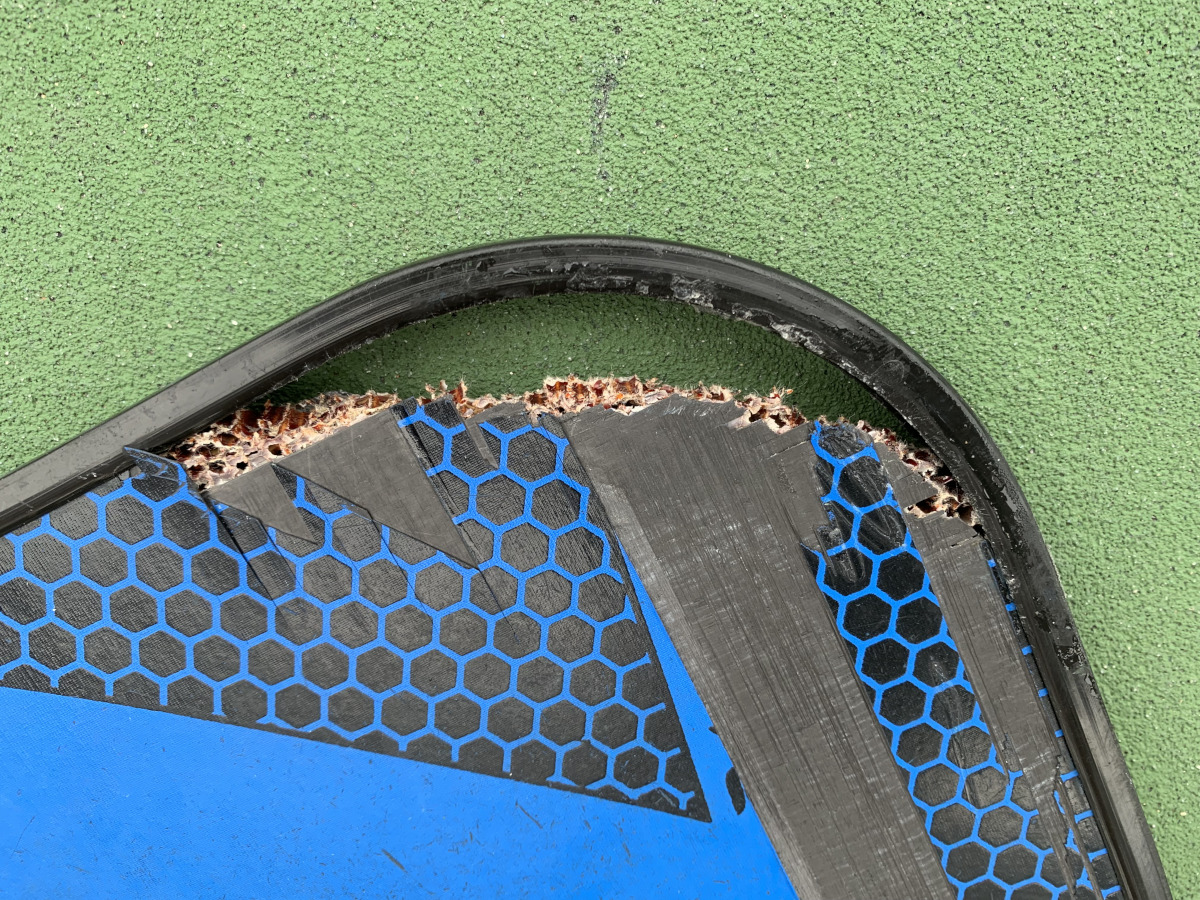 But it still worked fine. People started laughing at my worn paddle, which of course caused me to keep using it. We were all curious to see how bad it might become.

One day, the black plastic edge pnotecter came entirely loose from the top. It was flopping around. Even still, I could use the paddle, except when plastic strip came between the paddle surface and the ball. So, it had to be cut off.

The paddle not only continued to work but in my opinion was even better than original, being quite a bit lighter in weight. Of course, I’d be kicked out of an official tournament with that paddle, but that wasn’t a concern for recreational play.

Now that the edge protecter was gone, the material started to wear away more rapidly from the corners. You’d see little corrugated strips laying on the courts where I had played.

I kept telling people that I’d retire the paddle when it got down to the size of a teaspoon. Even thought it still works fine today, I have in fact retired it. I started to think that if a teammate and I tried for the same shot, there’s a chance I’d scratch my partner’s hand or arm. I would imagine the scratch with that rough material could be quite severe.

Now I’m using a brand new Z5 just like the old one.

I’ve seen many pickleballers who try multiple paddles, spending as much as it takes to get the most recent fashionable product. I continue to use my Z5. I’m certainly not the best player in the world, but I hope this little story lets people know that the quality of the game is far more based on the skill of the player than having the exact right paddle.

As an aside, in the 1970s when bicycle racers all felt they had to shave their legs and wear chamois-lined black wool shorts to be competitive, the fastest racer in New York started showing up with hairy legs and his shorts inside out. He still won most races.

These pickleball shoes still have some wear left in them.

In an average hour of pickleball an average player will take around 2600 steps, covering 1.2 miles (1.93 km) and burn between 100 and 150 calories. If you’d like to lose one pound of fat, you’ll need to play an extra 28 hours of pickleball. Sorry about that!

Body Language Down the Middle

Sometimes you and your partner have to respond to a ball coming right between the two of you. If you are both right or left-handed, you still might not be able to respond properly, if the ball is slightly offset, or if it is coming just too fast. Normally, you are supposed to talk, like “Mine,” or “You Go.” But there may not be enough time, or for various reasons verbal communication won’t work. There is another response. This response I’m about to disclose is somewhat automatic among good players. They may not even know they’re doing it.

On the other hand, you may notice your partner backing off. The minute you recognize that, the ball is all yours.

All this body language can be quite subtle, but can work better than actual words.

Avoiding the Tendency to Smash

You so often see people trying to smash an overhand from just behind the non-volley line and then blast the ball into the net, that you might think a different strategy is in order. You’re right!

This is one of the harder things to learn in pickleball, yet it is one of the simplest strategies: Don’t try to finish the rally with a hard shot unless you have a clear opportunity. You’ll come out way ahead if you simply rally the ball back to your opponents until you have a guaranteed put-away. That’s why you see players in top competitions patiently rallying softly back and forth in the kitchen for long periods of time. Unless they have a sure shot, they know it is better to wait for their opponents to make mistakes.

Along the same lines, you’re generally better off not driving a hard forehand at your opponents when everyone is at the kitchen. This can work well when you’re at 4.0-level play, because your opponents will not have the experience to react quickly. However, if you try a hard-driven ball at high-level players, it will simply come back to you even harder and faster. Or, a very experienced player may return your blast very softly, reducing the play back down to a mellow kitchen rally.

Every now and then you see a situation in which a high ball is coming to your partner, but your partner isn’t ready, being too far back. If you are right-handed, this is usually when you are on the left side of the court. In less experienced play, this can happen at any time. In higher-level play this most often happens when a shot, generally the third shot, is expected to land in the kitchen, but is accidentally too high or too long. The ball can be coming way to your right so it is almost going to land on a sideline. In fact, your response will be more spectacular the closer to the sideline it is. You run all the way across the court, smashing it hard back to your opponents, and then because of your momentum, you continue, running past the right sideline. You will not be able to return in time to defend this shot, so it needs to be a kill shot. Anything less definitive will cause you embarrassment, so don’t take the chance unless you know you’ve got a winner. If your partner is particularly aware, s/he will yell ‘switch,’ and run to cover the side of the court you have just abandoned, in case your ‘kill’ shot comes back. This does require awareness of your partner’s movement (or lack of movement) to avoid a dangerous collision.

Getting Behind the Ball

Many shots are missed because the player didn’t get behind the ball. That means taking the extra energy necessary to step into the ball’s path so your body is aligned to have the best control for a return shot. This is especially important with diagonal dinking in the kitchen. Even though you will have to quickly return to a neutral position, you’ll have much better control if you step to where you need to be.

What If You Can’t Drop The Third Shot Into the Kitchen?

One of the best is to drive the ball hard and low across the net. Against top players this will seldom work because they’ll just slam it back even harder, quite possibly right at your feet, or at an impossible angle. But among average players, this is probably your best bet. If you are a tennis player, or have skill at low, fast shots, you can try putting long shots close to the sidelines. Most players will struggle with this, especially when you place a ball along the edge of the court away from the opponent’s strong hand, forcing a backhand or switch-handed return.

Another good place to put your fast low shot is right between the two players. They will often flub this return because of indecision as to who should return it.

Lobs are another possibility, but can be hard to place. Too close to the net and you’ll eat a monstrous return. Too far back, and it will probably land out of bounds. Too low, and it will be slammed back. Too high, and the opponents will have time to run back and return it. However, many beginners and even intermediate players misjudge the timing on lobs and fail to return them. 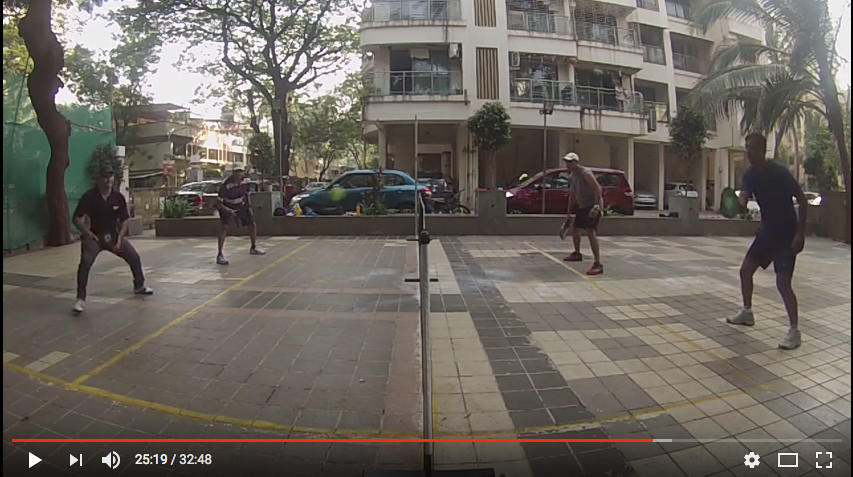 This has to be the worst pickleball surface ever. It appears to be full of cracks, the lines are hard to see, there are distracting patterns, and it even seems to be wet in places, yet at times they are playing a very high-quality game. Next time the sun is in your eyes, it is too windy, the net is too floppy, or anything else is wrong, remember that it’s possible to play a good game even in a situation like this.