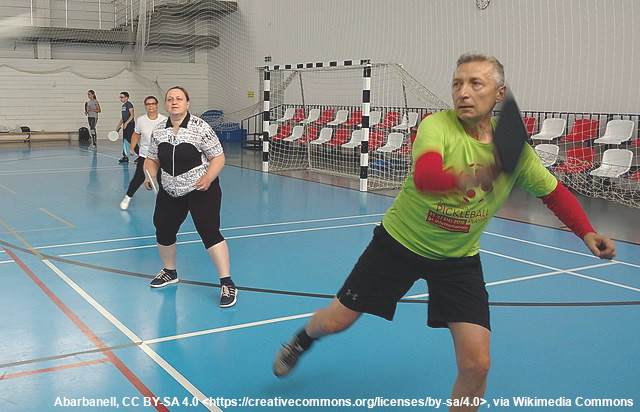 What do you do when you have only three people?

This situation happens surprisingly often. Perhaps your fourth hasn’t arrived yet, or may not show up at all. So, do you just do warm-up exercises forever?

The most common way to play this game is to start with one person on one side of the net, facing the other two. Often it’s the strongest player against the two weaker players. (Make sure to read on, there is a more equitable and fun version.)

In many ways it’s like ordinary four-person pickleball. The only difference is that the ball has to land in the half of the court occupied by the single player, while that player can place the ball anywhere in the opposing court. This enhances directional control, which is great practice for four-person play.

Just like ordinary 4-person, if the single player wins the rally, s/he then moves to the left side, and serves to the opponents’ left side.

When the serving switches to the two-player side, they serve and play just as normal, with each player serving until a failure occurs, starting with the person on the right.

Just like ordinary pickleball, a ‘failure’ is when a serve is no good, or a rally ends in favor of the opposing person or team, or a player violates a rule.

Depending on the relative strength of the single player, s/he may be allowed one or two failures.

Because of the difficulty of placing the ball in the smaller half-court, with all else being equal, the single player will win most games, even if s/he is only allowed one failure when serving.

Since there is no centerline in the kitchen, sometimes judging whether a ball landed in the proper half is difficult. You just have to depend on the recipient’s judgment in such cases.

If the single player plays a ball that’s coming to the wrong half, and loses the rally, that’s considered a fault.

Three-person games are generally played to seven points, then everyone rotates one position clockwise. A new game begins, with one of the players from the side that had two players becoming the new single player.

One somewhat rare variation is more fun overall. In this variation, The single player is allowed two failures, and keeps track only of his or her own score. Then everyone rotates one position. This way, it isn’t one against two so much as each competing for themselves. This way, in a short period of time, everyone gets to play every position.

The reason two failures are allowed instead of just one is to prevent rotating too often, which is more work than fun.

Finally, in any variation, if one of the three people is an especially strong player, that person may opt to play the full court, against the two other players, meaning they can place the ball anywhere that would be legal in ordinary 4-person pickleball.

The variation in which everyone rotates after two failures doesn’t yet have a name so far as your author knows. Do you have any ideas for a name? Leave a comment below, and what you come up with may become the name that everyone in the world will use.